WHAT TO SEE - Archaeological sites 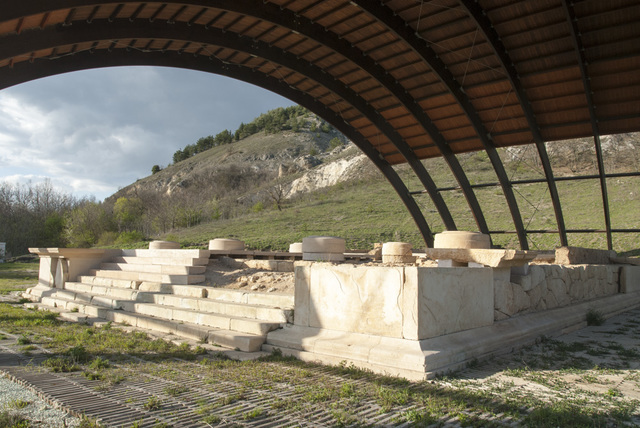 The structure of the temple is influenced by the Italian artistic culture of the mid-Republican era which was of Hellenistic inspiration. It is set on slabs of moulded limestone with a well-preserved, wide staircase, which allowed frontal access.  The interior, which was divided into three equal sections, had a deep portico with four columns in front and another two placed between the axes of the inner and the outer walls of the side sections.
The three interior spaces retain their mosaic floor with small black and white tiles and a perimeter band. In these areas, in all probability, many gods would have been worshipped but it has still has not been established to which of them the temple was dedicated. The dimensions suggest that more than one deity would have been worshipped, perhaps both a male and a female. Among the fragments which were found in the central section were  some relevant to a veined, white marble statue placed next to the statue of the goddess Minerva, as well as a lion made from local stone. Also at the entrance to the central section, is the inscription “ex pagi decreto”.
Several stone objects and votive bronzes were found including a seat made from local limestone belonging to another statue - perhaps that of Hercules considering the  iconography known in the region. There was also a bronze statuette of the god in combat, a ceramic offering bowl and a small animal shoe. Among the most recent finds were bronze oil lamps and coins.

The archaeological site covers a fenced area of ​​ 120m by 90m. The first moulded stone slabs came to light in 1987 by chance during the excavation for the construction of an agricultural building. During successive archaeological projects, a temple on a high podium from the 2nd century. B.C., about 15m wide and 20m long, was found. According to experts it was built with clay on the site of a pre-existing temple on a stone base dating back to between the 4th and the 3rd centuries B.C. The decline of this structure happened during the the Julio-Claudian era when the political, economic and religious activities that had previously vitalized the area surrounding the temple moved to Castelvecchio Subequo